Had a little charge on it when received, nearly charged our old backup flip phone. Recharged this cell and it has re-charged our old backup flip phone twice from it's one charge using the magnetic single cell charger I purchased with at the same time, here on CC. If you don't have a carrier for it this cell, grab one of CC's Delrin 18650 battery capsules, they fit perfectly.

These are very high quality 18650 batteries that are perfect for all my Maratac flashlights that use this type accumulator. They put the correct tension on the spring contacts and fit the tube body exactly. I really like the amount of charge they hold. My flashlights perform their best with these. It’s good to get a few and cycle through them.

Battery works great on my Fenix UC40UE ( discontinued) however is smaller then OEM battery. Also was wondering if battery is rechargeable??? 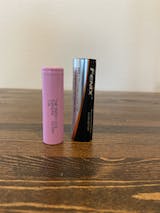 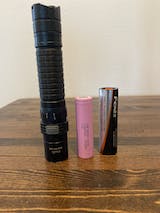 Great product. I got an extra battery for my head lamp (another great product). Now I don’t have to worry about running out of juice on my hunting trips.

12
← Back to Other Lights
Zulu™ & Maratac™ Are Registered Trademarks Of CountyComm
WARNING: This product may contain chemicals known to the State of California to cause cancer and birth defects or other reproductive harm. For more information, go to www.P65Warnings.ca.gov