The TLL ( Temporary Landing Light ) STROBE was developed as a safe alternative to using flares to rapidly set up and mark LZs (Landing Zones) in emergency situations. Once we started fielding the TLL, we quickly discovered that they had more uses that did not include aircraft. Here’s some of the ways we are using the TLL around here:

The strobe marks our duck blind to help us find it early in the morning.

It makes a great camping lantern. It illuminates the entire tent on low power and provides a nice reading light.

When going to a local football game, I left a TLL strobing in my car. When the game was over later that night, I had no problems finding my car. One of the security officers asked me about the flashing. He said the bright light brought their attention to my car. I consider the extra attention from the security staff a free bonus.

When camping, I gave one to my little girl. It’s big enough where she won’t loose it and rugged enough so she can’t break it. She can sit it down on it’s flat bottom and use the light. Probably most importantly, I don’t worry about her draining the battery. The TLL belongs in every “GO Bag”, car, boat, first aid kit, actually every where. If you set up emergency LZs for a living, you may already know about the versatility of the TLL, If not think of all the places where you could use one.

Using a single Duracell D Cell battery we got the following results:

A Note From The Legal Department: As with all cool stuff, “battery not included”. We do not recommend the use of lithium rechargeable batteries with this flashlight, which have a higher voltage. It is designed to use a off the shelf alkaline & lithium. We do not recommend use of higher voltage batteries. Any attempt to modify these lights will void the warranty.
No battery or tripod included.

Get the magnetic screw in bottom, pick up a few high capacity rechargeable batteries, and this thing is SOLID. I realize most people want to run this light on 4 AA batteries, but that is dumb. Instead, you can have it on high for 20 hours, or low at 375 on just a single high quality D battery. Think about that. That is HUGE. 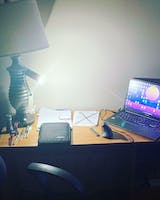 I’ve been eyeing one of these for awhile now and when they came up on sale, I went for it.

I originally was attracted to it as it took a D cell for long life. However, using a D cell in it leaves a lot to be desired as far as brightness is concerned. The included 4 AA battery insert is the way to go! Much, much brighter and brings this light to life! However, that it can operate on a D cell in an emergency is nice..

All in all, it’s a well built handy light. I added 2 glow-in-the-dark, (GID), Orings to the grooves in the body and it looks cool and glows brighter in the dark than with just the glow retainer ring.

K
Kevin Whipp (Germantown, US)
Owned 2 of the Rev 2 TLLs

I bought 2 of the Rev 2 C-cell TLLs over six years ago. I love these lights! I screwed magnets to the 1/4"-20 thread and stuck them everywhere I needed light: inside the hood of the Jeep, on the back of the Gator on the road, and sit it in the middle of the room with the lights go out. I recently had an alkaline battery corrode one, so I figured it was time to upgrade to Rev 4.

I put a D-cell in this and am letting it run to see how long it will last. 4-days and still going. Granted, this on low setting, but am very impressed. Very well built.

I have a Leland Emergency Strobe Light for many years now and decided to have this as replacement. It's a real upgrade to having an aluminium casing. This will last for many years. It's a good idea to read the recommendations for battery type. Most of us won't be landing helicopters but this would make a great light for the car or field work at night.

25154
Verified Reviews
Warning: This product may contains chemicals, which is known to the State of California to cause cancer and birth defects or other reproductive harm. For more information, go to www.p65warnings.ca.gov